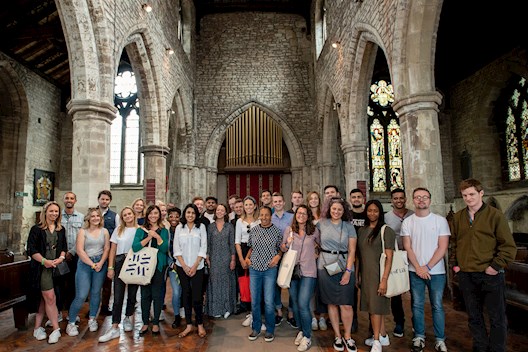 This August Long Harbour launched The Wullcomb, a 297 unit Build to Rent development in the heart of Leicester.  As part of the launch program, Long Harbour and the Long Harbour Charity Committee organised a clean-up operation to take place in the grounds of one of the city’s most historic churches next door to the building.

Long Harbour purchased The Wullcomb in 2017 and arranged to tackle the rubbish and overgrowing weeds in the garden of All Saints’ Church upon completion.

A team of around 30 staff from the firm and its in-house property management company, Way of Life, volunteered to help spruce up their neighbour’s grounds, as The Wullcomb development opens its doors.

All Saints’ Church is one of Leicester’s most historic landmarks, with origins dating back to the 12th century.

Despite being redundant since 1986, the Grade I listed building remains a key part of the city’s heritage and is the resting place of one of its most famous residents, former Mayor of Leicester Gabriel Newton, who died in 1762.

“It is a beautiful church and it forms an important part of the city’s history,” said Chair of the Long Harbour Charity Committee, Tabitha Perry.

“We were aware that the grounds were in need of some attention and in line with the firm’s charitable efforts, we decided to bring the staff together to help tackle this as part of our annual team building away day. We want to provide the best environment for our residents, whilst engaging with and contributing positively to our local communities too.”

All Saints’ is looked after by the Churches Conservation Trust, which Long Harbour has worked with to gain access to the site.

Long Harbour’s community driven efforts don't end there either, as on the following Friday morning we donated over 30 sleeping bags to local homelessness charity, The Bridge, who carry out vital work for those without homes in the city.

The Wullcomb is Leicester’s first purpose Build to Rent development and is being marketed, let and managed by Way of Life, Long Harbour’s in-house property management company, dedicated to the multifamily portfolio. The Wullcomb opened its doors to its first residents on 28th August and its staff look forward to continuing to engage with the local community.

For more information about Way of Life and The Wullcomb, visit: www.thewullcomb.com.