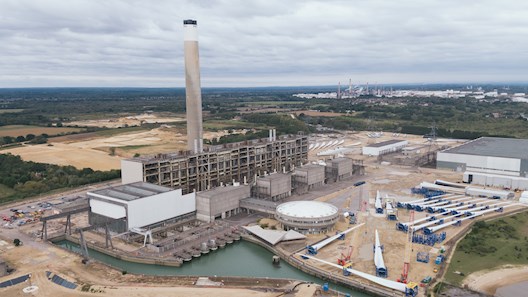 From 9.00am an exclusion zone was enforced around the site. Sentries and the police marked the exclusion zone boundary and temporarily restricted any access.

Fawley Waterside held two public information sessions in Calshot and Fawley Village to inform residents of the demolition process. These were attended by nearly 100 people. Relevant stakeholders and landowners were also readily informed. Those residents adjacent or in close proximity to the site were informed of the date and time of the first explosive event one week before.

In 2016 Brown and Mason, as principal demolition contractor, were appointed to carry out demolition of the Fawley Power Station site. The first stage of their work included the strip out of machinery from inside the main buildings and the clearing of infrastructure around the chimney. This took just over two years to complete.

In January 2019 Fawley Waterside submitted an application for Prior Notification of Demolition to New Forest District Council as part of the continued management of the former Power Station site. This application covered the dismantling, removal and site clearance of buildings followed by remediation. It was approved in May and in June, Brown and Mason began preparation for demolition of the main buildings including the Turbine Hall, De-Aerator Building, Boiler House, Chimney and Administration Building. The application includes three explosive events over a two-year period. Demolition is estimated to be complete by 2021.

Drone footage of the first explosive event can be seen here: http://news.fawleywaterside.co.uk/explosive/